The BATTLE OF THE BANDS (BOTB) has been portrayed in many a film. I remember watching School of Rock when I was a pre-teen, I was blown away! It was in a movie, so that kind of crowd reaction must be real? My imagination would run, and I would play my songs and people would stop talking and turn to me and think “WOW! THIS IS AMAZING!” The entire venue would be packed. Most of them would be beautiful, screaming women, a couple goths out there as well. I would win them over with this great joke I tell. I would jump out and crowd surf a little. Han Solo would be on the side of the stage and shoot me a wink. “Great shot, kid! That was one in a million!”

I wish I had a time machine so I could burst my naive little bubble. Life is nothing like a movie. I was an idiot, I shouldn’t have thought this was how it was going to be. It’s kind of like watching The Notebook and thinking, “that is what love looks like, this should work for me!” You don’t look like Ryan Gosling. If you are that aggressive your love interest will rightly believe you are insane. Maybe not a bad thing, perhaps you’re shooting for crazy, and that’s part of your charm. Hell, It worked for me for a few years. My long-winded point is pop culture gave me an extremely high expectation bar to clear. When I watched School of Rock and thought, “This is how it’s going to be!” There is a popular meme that points out how funny it is that so many people showed up to watch the battle of the bands on a weekday in the MIDDLE OF THE DAY. If you’ve ever played a battle of the bands, this usually isn’t the case. I have battled more than a few bands, I have even won! … once, kind of by default. Ahem, it’s not important. Perhaps you have played one, maybe you haven’t. BOTB’s are rarely what you think they will be. I firmly believe the only group that wins in a battle royal is the venue. Let me crush your dreams right here. You are talented, you deserve to be heard. Here’s the kicker, most of the groups you’re playing with are talented and deserve to be heard too. If you stepped into a room filled with clones of Megan Markle, which one is the most attractive to you? Why did I pick Megan Markle? I was going to pick Olivia Wilde… but I felt that she hasn’t done anything recently and seemed kind of old news. Man, that sentence is sad. Well, she still looks great to me. You’ll always be my number one, Olivia.

How can I make this work? Hmm, if you stepped into a room filled with U2 caliber talent groups, who should win? Does it really even matter at this point? You got to hear some great music! Most BOTB competitions have the venue making most (if not all) of the proceeds from the ticket sales, and whatever bullshit prize they are toting is probably just that. Bullshit. It is easy to make something sound great. I mean, Hollywood does this daily. I’m sure your thinking alines with what I thought. “Well, I’ll be getting great exposure! We will win the fans over from other groups!” I’m not going to say you won’t have a couple people start to follow your band around. But most of these bands will not

A. Fit your genre

2. Their fans are their friends who have come out because they love and support them, they don’t really care about music as much as they care for their friend.

D. Who’s to say they will even stick around for your band?

(Some John Hughes humor for you) Most BOTB’s go on for HOURS. I have a hard time sticking around for some of the acts, and I LOVE MUSIC. Maybe you love it more than I do. If so, you don’t even need to sign up for a BOTB, just go find where one is and watch a few groups. I’m doing a shitty job of leading up to my main point.

The only real benefit to a BOTB is networking with other bands. If you’re going to play one, you should really only be going to meet other groups. If while you’re at the event, you are shy and refuse to talk with other bands. You missed the point of the whole thing. Meeting other acts is incredible! I cannot number how many extra gigs I got because I spoke with another band. Stop having a “US AGAINST THE WORLD” mentality and adopt a “COMMUNITY” attitude. Not everyone else will, some bands are just a bunch of pricks who like to make noise. Advertisers are always saying a person needs to see something SEVEN times before someone really SEE IT. That BOTB has several other bands playing. That’s a lot of information to take in. If you really want to piggyback fans, gain exposure into a circle you’ve yet to penetrate. Genuinely befriend a band, become a fan of their music, book gigs where swap open for each other. If you perform at a battle of the bands with this in mind, then you will always come out a winner! 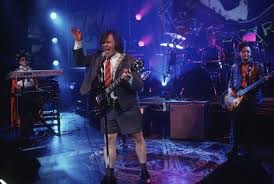 If you only take one thing from this, just remember… You’re not hardcore unless you live hardcore! AND THE LEGEND OF THE RENT WAS WAY HARDCORE!!!!

Recording soon? Follow the link! Preparing for the Recording Studio